Review of The Old Woman, the Tulip, and the Dog by Alicia Suskin Ostriker 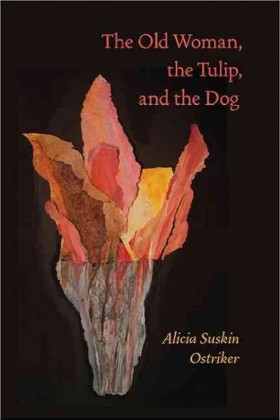 Keats says of poetry “that it should be a friend to man,” and in the warmth and wisdom of Alicia Suskin Ostriker’s fourteenth collection The Old Woman, the Tulip, and the Dog is a true friend. Or rather, in each of the central narrators, three friends: the old woman reviewing her life and memories; the tulip immersed in aesthetics and sensuality; and the dog always moving, always in the present. Each poem is a triptych of each of these perspectives, beginning with “The Blessing of the Old Woman, the Tulip, and the Dog,” which also appeared in her previous collection The Book of Seventy:

This poem sets the tone of each speaker and provides the central meditations that occupy the poems that follow: love, faith, what it means to have lived and to live. Each perspective here, as in each poem, is in conversation with the others but still a coherent whole. These are poems comprised of parts, but they are not fragmentary.

The pervasiveness of the triptych form makes it tempting to reduce each speaker into a singular theme or idea, for example to brand them respectively as mind, body, and feeling. Where I think Ostriker is particularly masterful is in resisting this simplification. The poems enact the Stein epigraph to the book that “A very important thing is not to make up your mind that you are any one thing.” The dog is as likely to ask “come on and / throw me / that Frisbee” (“The Moment on Stage I”) as it is to say “Appearance . . . / is not everything and biology is not destiny” (“What We Love”). Indeed the dog displays an awareness and repudiation of the desire towards categorization in “In Every Life”:

You are creating distinctions
that do not exist in nature
where “self” and “not-self” are like salt
in ocean, cloud in sky
oxygen in fire

This resistance results in versatile poems of vastly different dictions and allusions, ranging in topic from the joy of “Song” to the violence of “Anger II: Rape.” These divergent poems are interspersed among each other, so that the exuberant and overflowing language of “They Speak of Race”—

—directly faces the quiet and deceptively simple “Awakening,” which reads in its entirety:

It can take a lifetime
says the old woman

It can take a single deep kiss
says the tulip

Time to take a nap
says the dog

Yet the heteroglossic effect of the multitude of dictions is not cacophonous. I am reminded of Ostriker’s midrash practice in how each poem, and each perspective, deepens the questions of faith, love and living raised by the opening poem, but doesn’t exclude previous versions or seek resolution. Outside of the triptych form of the individual poems—where each character is given a stanza of equal length and weight—there is a meditative feel to the book as a whole. Comprised of six sections of seven poems, with each section roughly seven pages, there is balance and precision in the arrangement of poems. The overall effect is one of widening, an idea that we a viewing multiple sides of a whole that is too vast to perceive in its entirety. Describing the book this way might do it a disservice, make it appear overly intellectual, rather than what it is: a joyous, humorous and reverent examination of life. It is no coincidence that the dog gets the last word of each poem, and the final words of the book in “Summertime”:

CAITLIN MALING has published poetry in Best Australian Poems 2013, Australian Poetry, cordite, Westerly and Australian Book Review. While living in the US, she has published nonfiction in Threepenny Review and been a Yaddo Fellow. Her first book, Conversations I’ve Never Had, is forthcoming in 2015.