From The Apartment on Market Street: A Visit to Macy’s 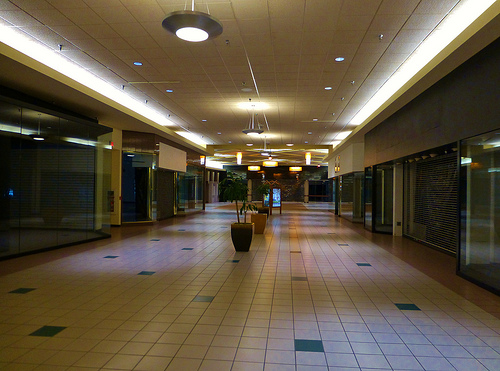 A few days after it came up with our relationship counselor, Seth, we made our way to the Macy’s cosmetics counter at the Holyoke Mall.

The Holyoke Mall was the shopping mall at the nexus of biggest and closest to us, so that one of the things Anna and I did together was Go to the Mall. Some of our graduate school friends were, I’d gathered, morally opposed to Going to the Mall. Or, they considered it too low-brow. Or, they would go to the mall walk through it with the same relish with which they’d eat a fried pie at a carnival. For a while, in defense of Anna’s and my mall visits, I contended that I enjoyed knowing what I was up against – i.e. the whole of consumer society – but, even that had give way, and, several times a month Anna and I gave ourselves over to the mall’s saccharin poetry, our mass-market arcade.

Besides, Anna needed a new lip-color for fall.

We were starting our weekend.

We hopped on the Interstate and took exit 15 into Holyoke, eventually coming through the birth canal of the gargantuan New England shopping center and parked in the deck.

Generally, I liked our mall visits, liked them for how they contrasted with our adopted town, Northampton, which functioned most prominently as an open-air consumer haven, itself not unlike a mall. But, as we progressed through traffic, while Anna toggled between the four Top 40 stations she’d programmed onto the radio, and while she continued a running monologue concerning which colors were “in” that fall, I found myself trying to figure the degree to which our current visit might be a pre-cursor to my becoming the stoical-man-holding-shopping-bags and, suddenly, became alert to the ease with which I could involve us in a fender-bender.

After some circling, I found a spot small enough it required a four-point turn of the Corolla in order to wedge us between a pick-up and a graffiti-ed concrete pillar. Anna put her hand up for a high-five, which I met with enthusiasm, because hot-damn!

As we sorted ourselves toward the Macys behemoth, I casually let slide the remembrance that all my previous girlfriends were somewhat dirty, in a pretty way, and more-less opposed to makeup, because they were all artistic. This caused Anna to be briefly appalled, briefly jealous, and only once this occurred did I recognize it as my tiny goal: to provide Anna a sense of outrage comingled with mock-outrage, and then to attempt remedy by asserting that Anna was pretty in a pretty way. I told her I was glad her progressive attitudes had not amounted to her forgetting how to groom herself. And, Anna took the bait – she said she wished she could say the same of me.

While not perfect, this recovery is what Seth would have called Good Enough.

We held hands in the high-school way of interlocking fingers. Anna’s engagement ring dug into my middle-finger, and she did this because I was her rascal, and because her love for me was slightly fierce.

Inside the opulent store, I spied the cosmetics counter, with its bottom-lit fluorescence, with its white-on-white. And, there was the makeup lady – a tall, thin nurse. With remarkable efficiency, she and Anna were girlfriends bonding over cosmetics, and surprise, surprise, this makeup lady had just the thing. She found it in a giant drawer and dabbed it on Anna’s lips with a Q-tip. Almost before seeing herself in the mirror, Anna said, “Yes, I like it.”

But, the make-up lady approved. “Love-ly,” she said, causing Anna to bat her eyes at me. Then, she turned back to the make-up lady, with whom she was enjoying a high-level of shopping-mall rapport.

A thing I seemed to know was that a prominent manner of predicting a relationship’s longevity had to do with the degree to which a couple was similar in individual attractiveness – e.g. sixes should marry sixes, sevens should marry sevens. At moments like this it was apparent that I was marrying up. By luck or charm, by our age difference, or by my proclivity to wax poetical, I had reached up through an appearance-ceiling that for all its current glory could be the kernel of decades-long suspicion. But, that was only if high school psychology textbooks and romantic-comedy dude-chats were to be believed.

The small talk was ongoing between Anna and the makeup lady. The new autumn color-tube sat counter-side in a tiny bag and while I gazed off into the far reaches of the shopping floor, I considered Anna’s wonderfully contradictory stances re: the ideologies of femininity as a salve to my own handsomeness issues.

It was true that under Anna’s influence, I’d also become slightly adherent to a practical, reformed notion of appearance that included more regular haircuts, and a trading-in of my former aspirations to appear an inheritor of the clothing of Tom Sawyer for the kind of fitted shirts and pants an emerging-adult man can acquire at the Banana Republic. Through Anna’s influence, too, I’d sort-of tamed my curly hair, and procured enough casual dress clothes to make it through the work week. In fact, the success of my nascent metro-sexual-ism left little besides the maddeningly persistent rosacea that dotted my nose and cheeks as an obstacle needing redress.

And, then – wouldn’t you know it? – the makeup lady also had something for me.

What else could I do but accept the cushioned stool when it was pushed my direction? What I supposed as I settled onto it was, “Fuck it. Everybody wants to be more handsome.”

Even so, my inclination was to struggle against the cream when it arrived via cotton-ball. After which, the makeup lady stepped back, admired, turned to Anna and said, “See. Takes the red right out.”

Then, she brushed her hands together as if my face was a disorderly thing now fixed.

The mirror became handed to me. Peering into it, I saw only skin where blemishes had erupted, and I couldn’t help but puff-up at the idea that cover-up could make a thing go away.

JACK CHRISTIAN is the author of Family System, which won the 2012 Colorado Poetry Prize. Other excerpts from “The Apartment on Market Street” have appeared in Carolina Quarterly and The Weeklings.